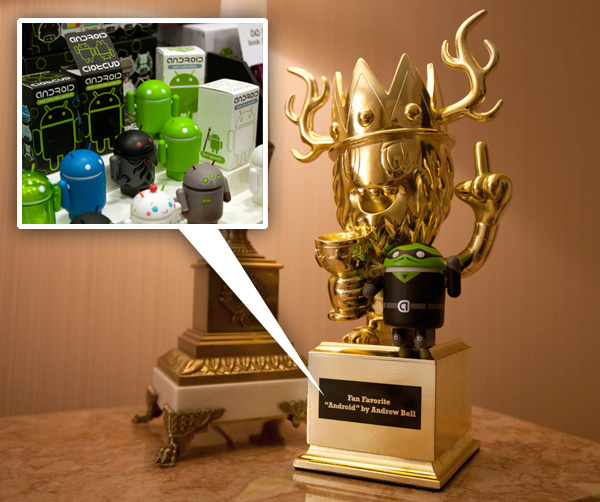 So, thanks to a few awesome toy/webcomic friends, i found myself hiding out in San Diego the last few days at Comic Con ~ while there… the first annual International Designer Toy Awards (DTA) were hosted at SDCC 2011 this year! And close friend and maker of creatures and androids, Andrew Bell, won FAN FAVORITE!!! (Congrats, Andy!)

What did winners receive? These awesome golden TOY KING trophies designed by Pete Fowler ~ so after a fun night out, we couldn’t resist a litte hotel room photoshoot to share just how awesome Fowler’s trophy is! (From all angles, and posed with one of the new limited edition Androids of course!) Check out all the pics on the next page! 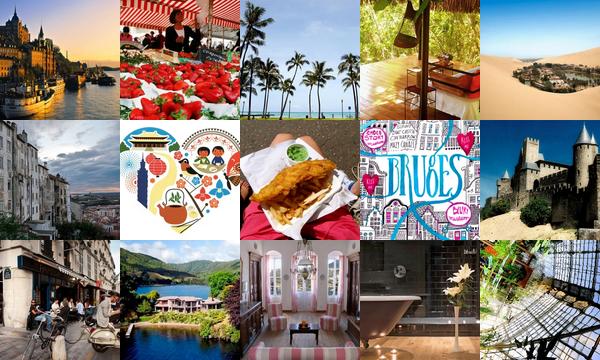 Get ready for your next adventure with a travel roundup from Notventures. Find out more about each destination by clicking on its individual image.

The Truvia Voyage of Discovery with Bompas & Parr 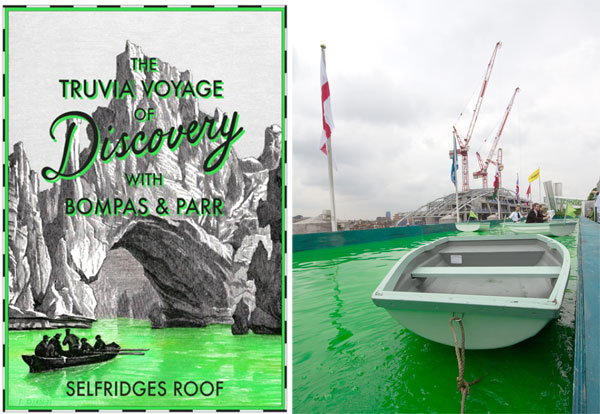 When I first caught wind of a new collaboration involving Bompas & Parr and Selfridges there was talk of flooded rooftops and rowboats above Oxford Street. And as always with the duo of jellymongers, one never knows quite what to believe (their previous shenanigans have included everything from a breathable cloud of Campari to chocolate waterfalls).

But sure enough, they have certainly delivered. The event’s official title is “The Truvia Voyage of Discovery” and as its name suggests is an introduction for the the natural, calorie-free Truvia® sweetener which will make its UK debut through Selfridges in a few months time. In typical Bompas & Parr style, the event must really be seen to be believed. No longer the barren urban rooftop along one of London’s most iconic shopping streets, the roof of Selfridges has been transformed into a home for thousands of stevia plants (from which the sweetener is derived) and a boating lake complete with a waterfall and a magical crystal bar/island. During their visit, voyagers can boat up to a bar where they can enjoy rooftop, boatside libations from the talent of the Experimental Cocktail Club as well as coffee and tea from the Caravan and the Rare Tea Company.

The rooftop madness runs from the 21st - 24th of July. Sadly, all tickets have already sold out! 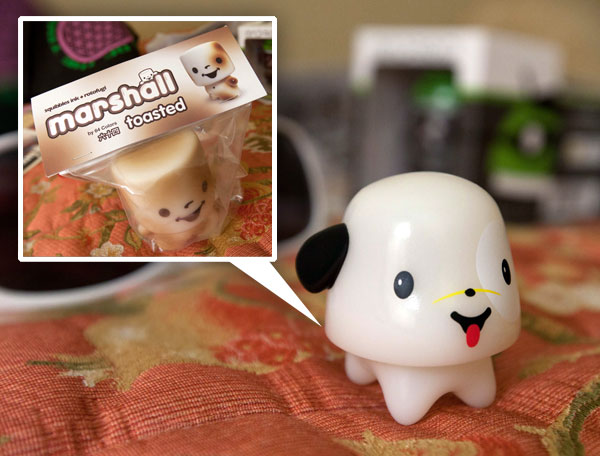 Somedays you just wander into things you’ve always thought about buying… and can’t resist. I’ve always been curious about these Marshalls ~ marshmallow characters from 64 Colors ~ since posting them on NOTCOT.org ages ago ~ and the toasted ones are all different! Hand “toasting” creates unique colorations for each one ~ and i couldn’t help but go through a few before picking this guy. And while at the Rotofugi booth, the new limited edition glow in the adorable sidekick of a puppy, Gumdrop, was too cute to resist as well. Take a peek at their booth and close ups of the two on the next page! 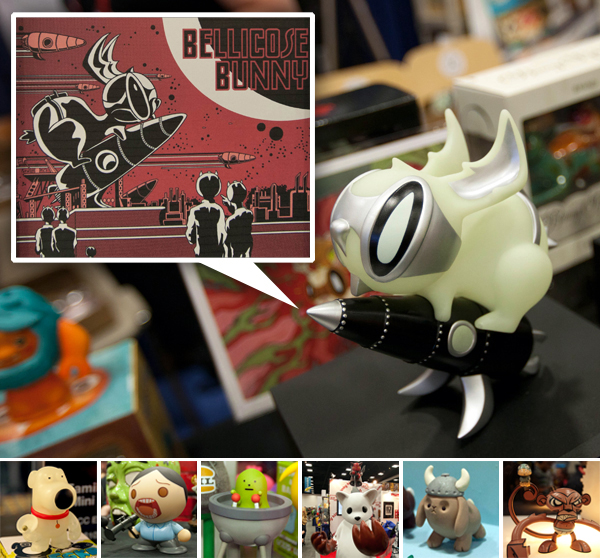 Toys! Toys! Toys! I forgot what chaos the world of comicon is ~ but there are so many fun art toys to be stared at in one place. While i desperately need to crash before more madness tomorrow (and i’ll be helping out at the Dumbrella booth #1337 around 1-3ish if you want to come visit) ~ had to show you some of the random toy goodness that ended up in my camera… explore it all on the next page! And more posts to come on goodies i couldn’t resist, etc… soon? Perhaps.

p.s. HUGE thank you to The Vinyl Frontier for helping get me a last minute pass to SDCC to check out all the toys ~ i was a bit slow on the press reg and missed it… but he saved the day! Check out The Vinyl Frontier on DVD ~ good stuff if you’re into the world of vinyl toys! 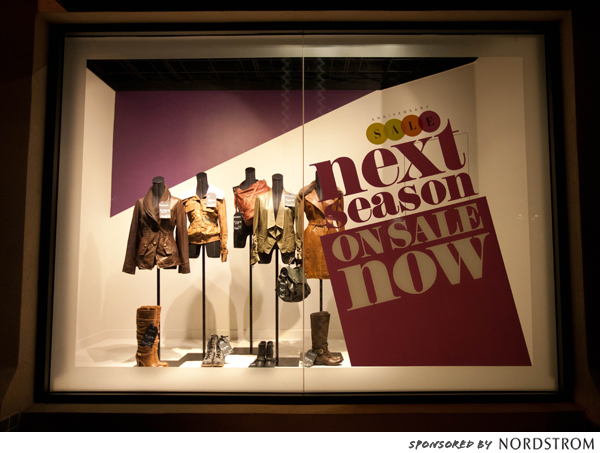 The universe works in mysterious ways ~ like when i was drawn in while walking home across the gaslamp district ~ i was pulled in by the glow of these windows and the merchandising as well as the labels and the way they were attached… only to realize they were for the Nordstrom Anniversary Sale ~ which i needed to write about tonight! So snapped a few pics of the displays to share with you here ~ there’s something so fun about how much more large window displays pop and come alive in the night… additionally check out some fun picks from the sale we’re liking! 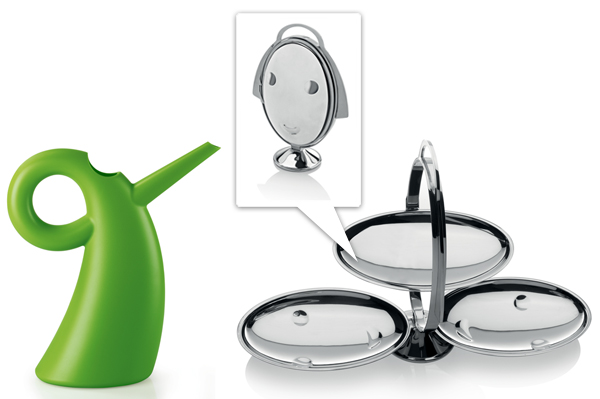 Sneak peek in to Alessi’s Fall/Winter 2011 product line ~ two grabbed my attention in particular. Eero Aarnio’s Diva watering can, is both elegantly simple and sassy all at once ~ in black, green, and a creamy white. And the Anna Gong is a nod at Mendini’s famous “Anna G” corkscrew and legendary folding cake stand “art.898”. Take a peek at closeups and more details on the next page. 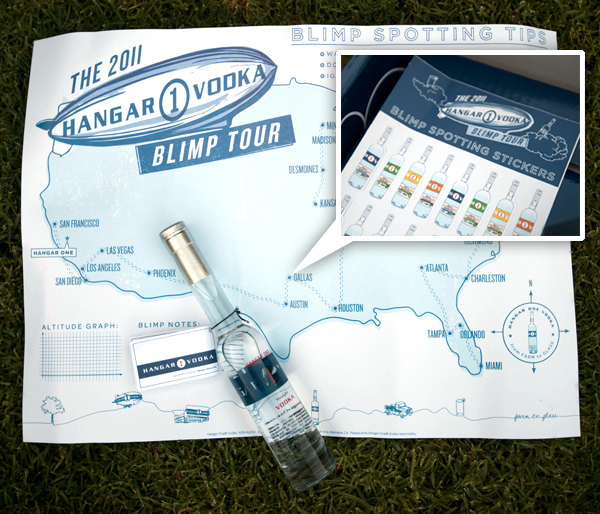 More fun surprises that arrived while i was in NY! Gorgeous pack for The 2011 Hangar One Vodka Blimp Tour… it’s fun to see that SF/Alameda’s Hangar One is now taking the country by… BLIMP! This very minute, the Hangar One blimp is adrift in the skies somewhere between Long Island and Boston. There’s nothing quite like a crazy continental blimp tour! The 120 foot aircraft with a vintage Hangar One airstream is on an epic 6 month tour which kicked off from Miami last month. Over the next 6 months, the blimp will be visiting over 20 cities across the US, before finally docking in Hangar One’s home of Alameda, CA at the end of November. Check out the blimp schedule to find when the team will be docking in your town. Because when the blimp comes to town, it’s more than a pit stop. Each stop is also a competition between 15 bartenders with winners for every stop.

Beautiful branding, illustration and packaging that goes along with the tour by Dead As We Know It! The gorgeous drawings have a homely feel that captures the handmade, small scale production of the spirits. The illustration runs throughout the press kit and the company’s website. Check out the gorgeous intro at the Hangar One Vodka site as well as The Ballad of Hangar One and documentaries about Hangar One’s Story, Farm and Process, created by Dead As We Know It… Now as for the goodies in the cardboard case that arrived ~ take a peek at the unboxing of the poster, BLIMPSPOTTING stickers, hat, t-shirt, and more on the next page! 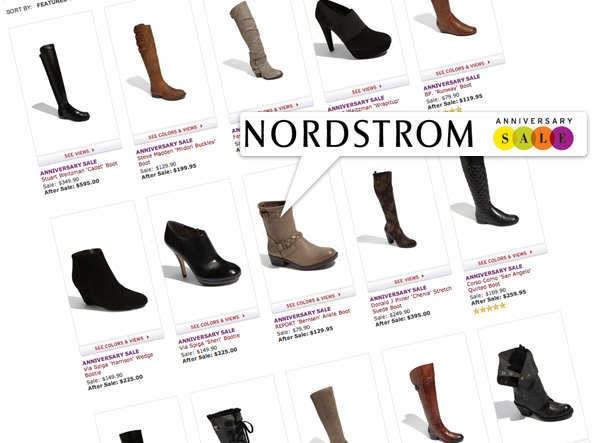 When prompted to go shop the Nordstrom’s sale for this ad campaign and share what tempted us ~ it definitely sounded fun and silly enough. After all, we’re perusing Nordstrom often anyhow ~ and you can check out the catalog online… while they do sponsor this post, they picks are all stuff we’re liking and shopping anyhow… i seem to be on a boot hunt tonight ~ from thigh high boots to wedged wellies to strappy biker flat boots… take a peek at what’s grabbed my eye on the next page…

p.s. thanks to all the fun readers who have been sharing what they’ve already bought/lusted after from the sale while i was trying to figure out what else to want while on twitter/facebook. 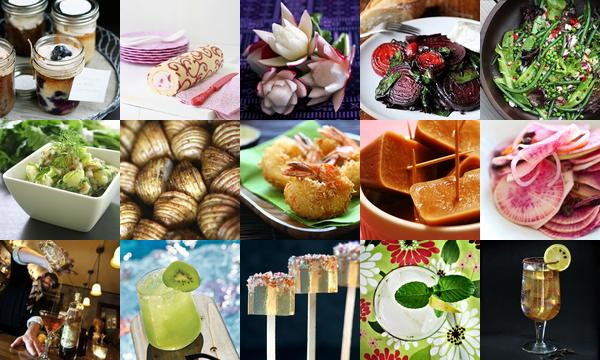 A sumptuous selection from the delectable Tasteologie and Liqurious. To find out more about each post, click on its individual image. 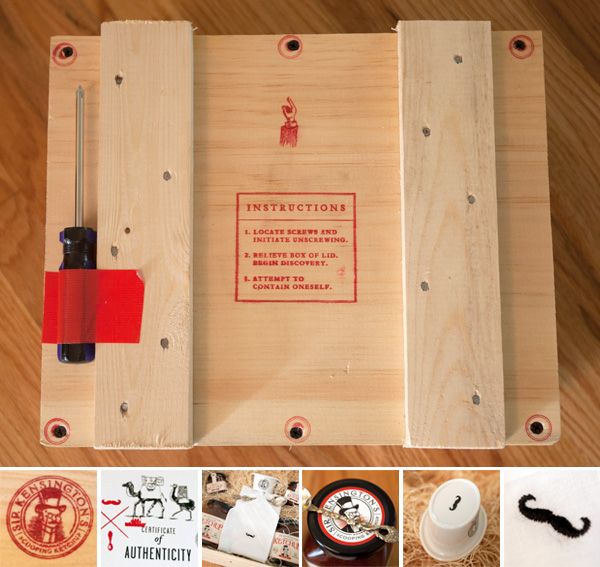 There’s something so incredibly enticing about a mysterious wooden box arriving. Especially when there is a screw driver taped to it and the instructions read: 1. Locate screws and initiate unscrewing. 2. Relieve box of lid begin discovery. 3. Attempt to contain oneself. I think i made it through steps one and two and totally failed at three.

Inside the mysterious box are some of the awesomest Sir Kensington of NY’s “Gourmet Scooping Ketchups” from i’ve yet to encounter ~ tantalizing deliciousness wrapped in wonderfully detailed and playful branding/packaging. From the full sized bottles of their Spiced (YUM!) ketchup to the adorable new minis (Heinz babies are cute, but i can totally see these on hotel room service trays!) ~ as well as a white top hat serving dish, ornate little spoon to scoop with, and a mustache embroidered handkerchief/napkin to dab ever so delicately with… nestled in straw. So how step three seemed possible, is beyond me. Additionally there’s an amazing little book included as well ~ but that’s worth a post of it’s own, so more to come on that… for now, go take a peek at the incredible packaging of this wooden box of goodies that just arrived from the magical world of Sir Kensington’s on the next page! 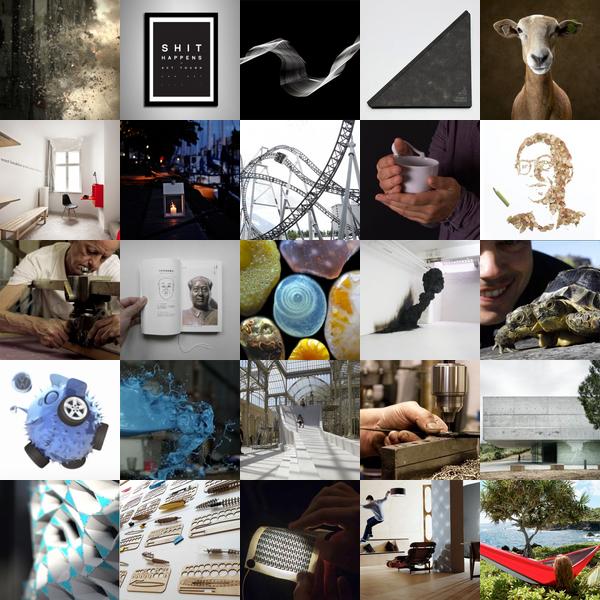 Crazy rollercoasters, tiny grains of sand and two-headed animals are all part of this week’s roundup from NOTCOT.org. To find out more about each post, click on its individual image.

The Tessellation Series by Matthew Shlian

Just in from our friends at Ghostly International appealing directly to our geometric love of tessellations… “We are proud to unveil our second art edition from the Ann Arbor-based paper artist and engineer Matthew Shlian. Conceived over a flurry of emails in the spring of this year, The Tessellation Series is an expression of intuitive design evolving from a fixed starting point. To illustrate the process by which the pattern has emerged, the series is presented as five distinct moments, or formations, in its evolution. In each formation, three-dimensional structures spread, in seemingly random order, toward the edge of the page. Closer inspection reveals the fine pencil drawn lines of the geometric shapes from which they rise, a blueprint for a pattern that is at once unfinished and complete.” Aren’t they mesmerizingly beautiful? Especially in animated gif form above? It’s hard to pick which of the various paper sculpture/prints i love best… they seem best when in a full set evolving from one step to the next! “Each tessellation formation is produced in an edition of ten, and comes signed and numbered for a series total of fifty (e.g. the first edition of Tessellation Formation 3 is numbered 31/50).” See details on the next page ~ they are stunning! 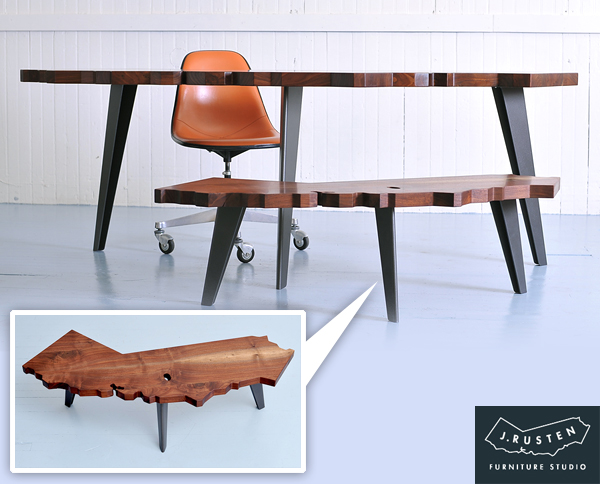 Having just touched back down in LA after a week of NY time ~ i must say, i do love california! And there is something strangely awesome about the shape of our state for a desk of coffee table apparently! Just discovered this new line of California Desks and Tables by J. Rusten Furniture Studio in my inbox. Aren’t they lovely? You have to see more of the details on the next page… and i’m tempted by the coffee table! I imagine leaving a pocket knife on the table with an invitation to all my california friends and companies popping by to etch their names where they live… though the clusters around the big cities might be a bit dense, there must be a fun way to turn this wooden map of a table more interactive! Or imagine if you had other states as well that would interlock nicely to turn from desk to US conference table? Anyhow ~ detail peeks on the next page… will keep dreaming up more ideas. 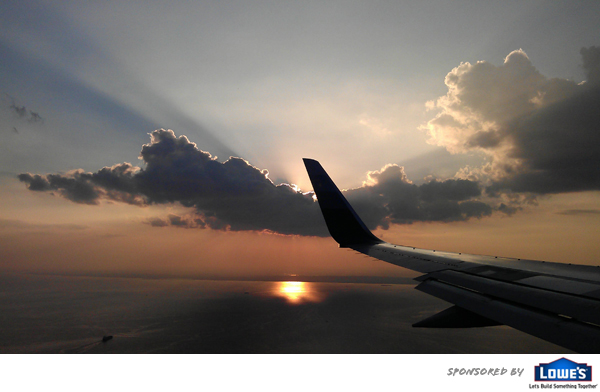 This post is brought to you by Lowe’s, and is the brainchild of NOTCOT. Find inspiration and encouragement as you plan, begin and complete do-it-yourself projects at Lowe’s Home 101.

I find myself staring into the sky a lot lately ~ especially in dense cities like New York, i can’t help but to stare upwards often. The clouds are just different! And the sunsets and Manhattanhenge have been awesomely dramatic… so when looking for home inspirations for this latest Lowe’s sponsored post, it seemed like the perfect excuse to see the color palettes we can pull out of these many sunset pics i’m finding on my phone this week! Take a peek at some of the stunning views on the next page!

p.s. I’m also playing with and very impressed with the camera/UX on the new HTC Sensation! These sunset pics were all snapped with its 8mgp camera!