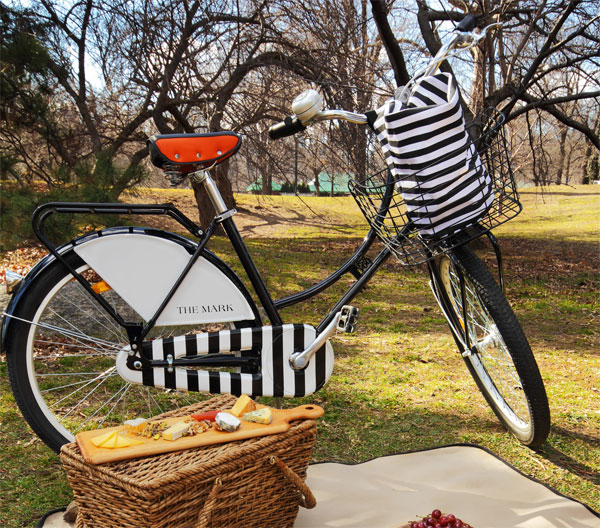 Adorable black and white bicycle loaded up with the “ultimate picnic in the park created by celebrated chef, George Vongerichten” ~ how could anyone resist? This is park of the latest luxury amenities added to the Mark Hotel including The Mark Restaurant and Bar by Jean-Georges Vongerichten; a shoe shine kiosk by John Lobb; martial arts gym Punch Fitness Center; and a Frederic Fekkai salon… this fleet of bikes are bespoke Republic Bikes with a striped chaincase and monogrammed bicycles, MARK1 license plates, signature black helmets and baskets! As for the ultimate picnic lunch - “Steamed Shrimp Salad, Avocado and Enoki, Champagne Dressing; Fresh Mozzarella, Marinated Roasted Peppers and Arugula; Black Truffle Pizza with Fontina Cheese; Mini Vanilla and Chocolate Éclairs Red velvet cupcake; and Artisanal Cheeses. Lunch-to-go also includes half a bottle of Champagne and a bottle of San Pellegrino. The picnic basket, together with blanket, plates, cutlery and glasses all fit neatly into the bicycles front basket, with a specially designed drink bottle cooler.” Adorable, isn’t it? See more picture on the next page! 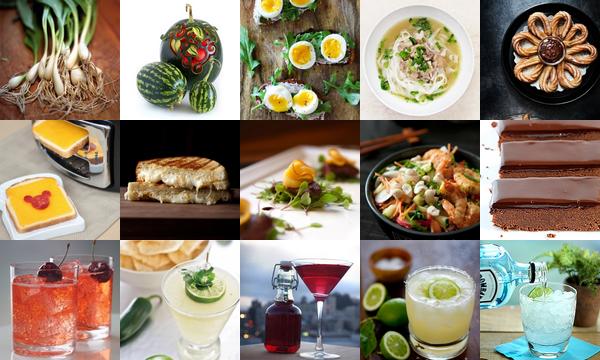 The anatomy of a good grilled cheese, homemade mint chocolate bars and a sip of cherry moon, are all part of this week’s roundup from Tasteologie and Liqurious. To find out more about each delectable post, click on its individual image.

Brains at the Wellcome Collection 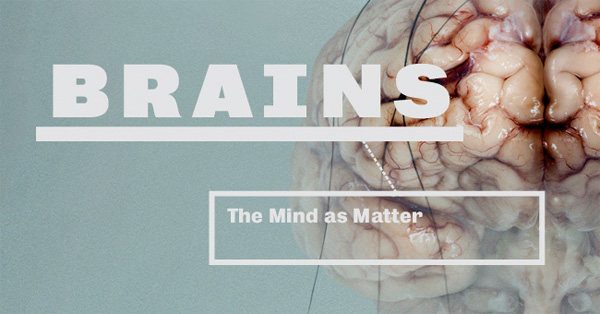 Earlier today, I found myself surrounded by grey matter in the stunning exhibition Brains: The mind as matter at the Wellcome Collection. The exhibition is a triumph, offering a fascinating look into our understanding of the anatomy of mind both today and throughout history. The curators have brought together over 150 artifacts surrounding the theme of the brain and they have done a fantastic job of bringing together a wide range of perspectives, genres and media as well as capturing the brain both scientifically and as a cultural object. In ‘Brains’, historical anatomical illustrations complement modern imaging, photo series accompany an elegant audio listening station and modern art and preserved brain specimens all work together in the exhibition space. Somehow, despite the wide variety of displays, the exhibition holds together beautifully and is truly awe-inspiring, though there are certainly chilling moments as we look back on early surgical instruments and videos of electroconvulsive therapy. 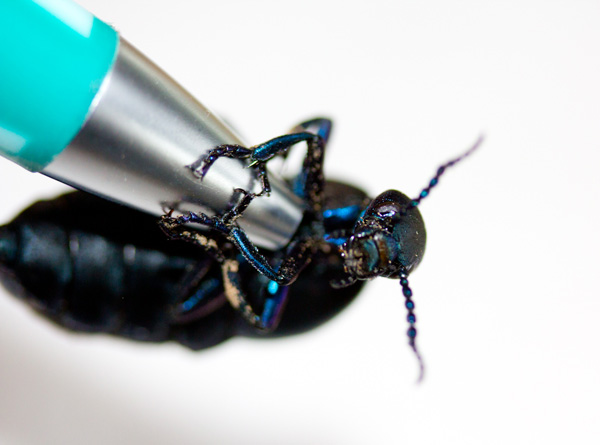 Despite being a zoologist, I confess, I wasn’t 100% sure what this amazing creature was when I first caught sight of it. A bright glint of blue and purple in the sunshine, it didn’t fit with its surroundings and the Londoner in me immediately dismissed it as a stray bit of foil or plastic. But then we noticed it was moving on its own, waddling along in a very exposed position at the edge of a Dorset field.

On closer inspection, it looked a bit like a rove beetle with its half-sized elytra (those hard outer wings), but it far larger and more iridescent than any rove beetle I’d ever seen (some 30mm long)! So we snapped a few photos of the beautiful beetle for ID, then popped it back on the soil, where it started to dig. Check out our photos and find out more about these beautiful and fascinating insects on the next page! 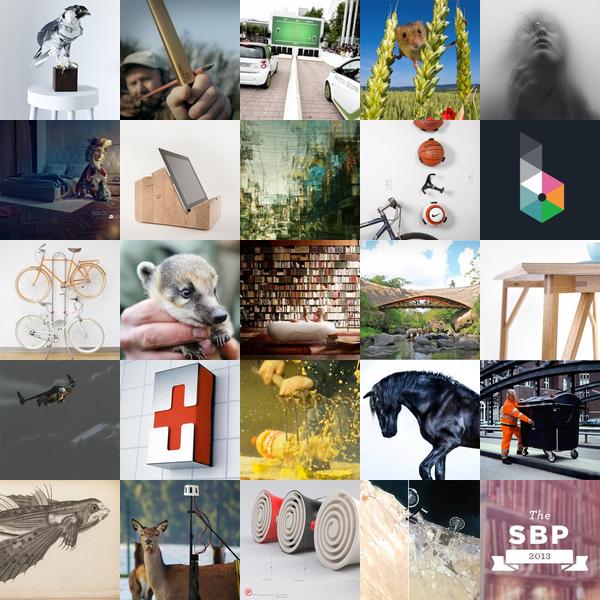 Dumpster pinhole cameras, stupidity in super slow motion and adorable baby coatis are all part of this week’s roundup from NOTCOT.org. To find out more about each post, click on its individual image. 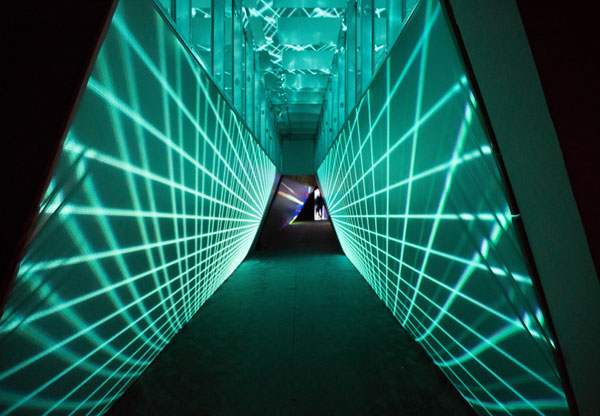 On the way in to Ben Jones’ installation with the crazy 8 bit video room at the Avant/Garde Diaries Transmission LA: A/V Club at MoCA… you go through a trippy and beautiful triangular digital tunnel… see the video on the next page! (I could have sat mesmerized in there for some time!) 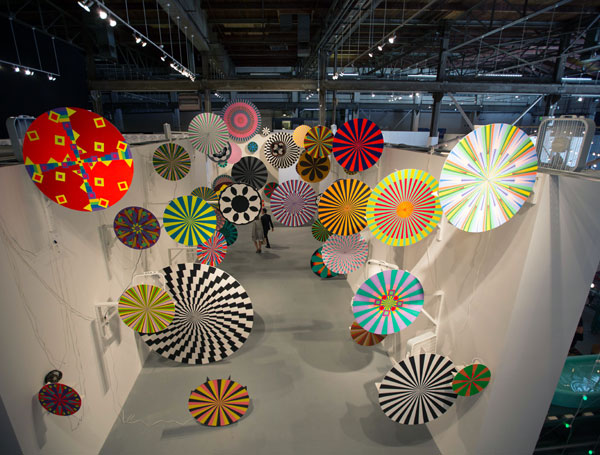 Ara Peterson & Jim Drain created a mind trip of household fan driven pinwheels which are dizzying and fascinating to walk through at Avant/Garde Diaries Transmission LA: A/V Club at MoCA… Constantly spinning as you wander through them and feel slight breezes coming from different angles, they suck you in if you fixate too hard on a particular one… and looking back it’s amazing to see that it really is just regular fans strategically positioned moving them! See the video and more pics on the next page! 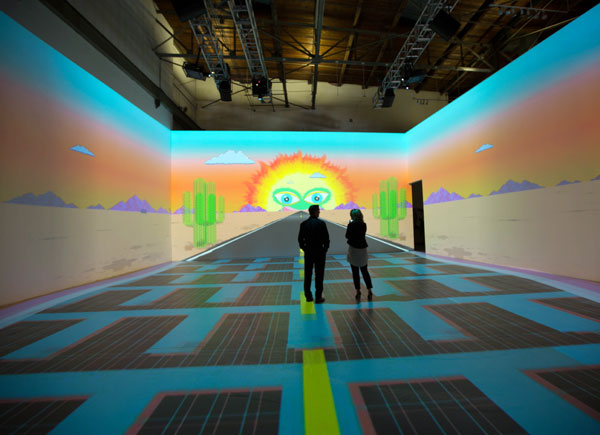 If you’re in LA before May 6th, Ben Jones’ installation at the Avant/Garde Diaries Transmission LA: A/V Club at MoCA is a must… no pictures or video can do the nauseatingly bizarre feeling of being in a never ending 8-bit race justice… but that being said, in case you can’t make it here, here’s a peek at how it felt on video on the next page! 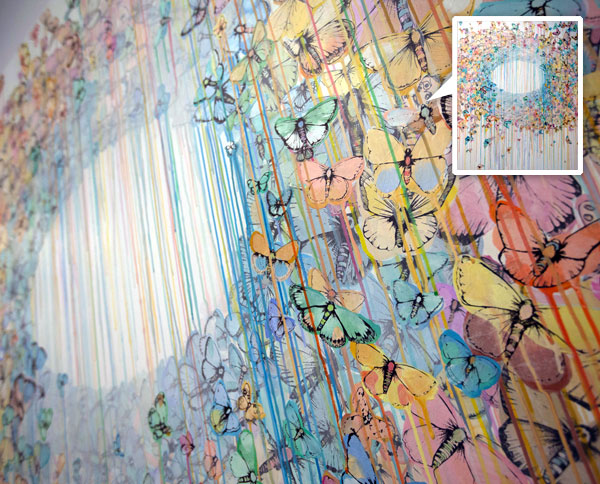 One of the artists that caught my eye at the Avant/Garde Diaries: Transmission LA: A/V CLUB was Sage Vaughn… take a look at some of the moth covered drip paintings on the next page! 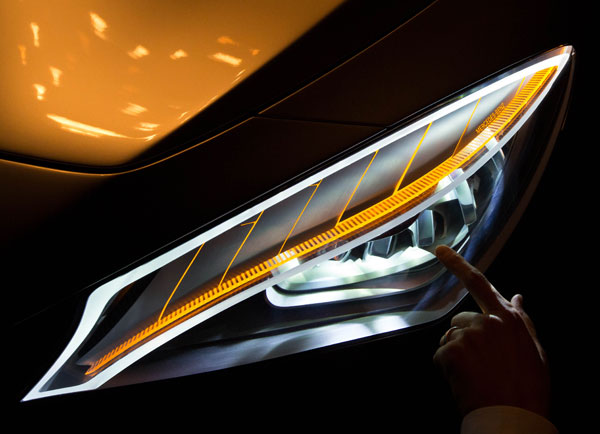 The new Mercedes-Benz Concept Style Coupé debuted last night at MOCA during the Avant/Garde Diaries: Transmission LA: A/V Club festival curated by Mike D of the Beastie Boys. In fact, it is integrated into one of the installations you can experience… “The four-door coupé is set in front of a large, matte mirror wall and is illuminated from above by LED panels arranged at a 30-degree angle to accentuate the distinctive, powerfully taut side lines. The LED lights react to a soundtrack that Ad Rock from Beastie Boys produced specifically for the installation.” says the press release… and from the high ceilings, AIAIAI headphones are hanging for you to stand and listen to the soundtrack as you stand in front of the car.

Throughout the party you’d see people midconversation waving their fingers as if mimicking the action of drumming your fingers on a table (pinky to forefinger one by one…) and you know they were all talking about the most fascinating feature of the Concept Style Coupé ~ the kinetic signal lights. With robotic eyelash like plates covering the yellow signal lights it almost feels like the car is trying to flirt with you as it bats its metal eyelashes.

Shawn had a chance to chat with the design/engineering team about how they worked, saying, “The car’s lights were an exciting opportunity for the design and engineering team to play with new technologies and interactions that we may see in the future. Each kinetic turn signal uses one actuator to power the 6 fingers which reveal the yellow light. This works a bit like a camshaft in your engine, where a single rod has multiple oblong attachments that are all rotated slightly. When the rod spins, the appearance is that of drumming or taping your fingers on a table. The main high/low beam light also opens with it’s own unique twist. It rotates open and has the effect of an iris of a lens. The combination of these simple mechanical elements and different lights offers an amazing peek into what the future of automotive lighting may be.” This also means my dream of programming them to move independently isn’t currently possible… it will be interesting to see if they keep this flirty detail in the production vehicle next year. Take a peek at a video of the lights in action on the next page as well as a few peeks at the car in the installation. 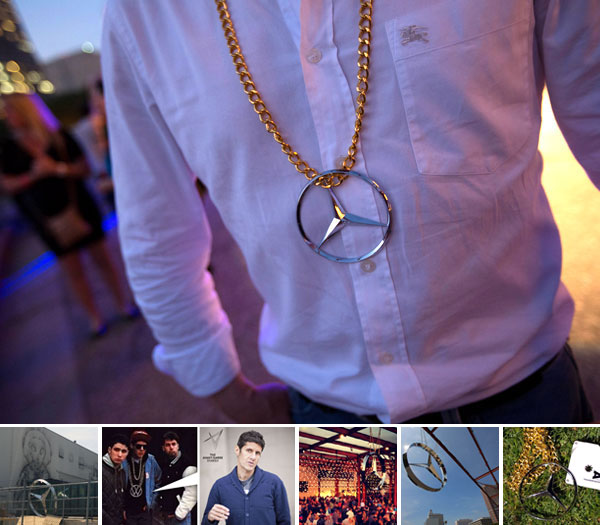 It’s another 4am and with so much inspiration from today to share, trying to just pick one to post before passing out… just back from the launch of Mercedes-Benz’s Avant/Garde Diaries: Transmission LA: A/V Club, curated by Mike D of the Beastie Boys at MOCA. A stunning body of work on show, great performance by Santigold, and a peek at the new Mercedes-Benz Concept Style Coupe… but before we get to any of that…

I never thought i’d be the girl wearing a heavy gold chain… especially a gold chain with a Mercedes Emblem! But tonight it happened… I remember as a little girl, being terribly confused when my dad’s Mercedes emblem was stolen. He tried to explain that people turned them into necklaces… It was the 80s. I was pretty young… and it wasn’t until years later that it all started to make sense. Mike D has apparently always had a thing for the car emblems, and even Inspired Fad Boosts VW Emblem Thefts when he was wearing a large VW emblem off a car on a gold chain… So it’s only natural that when curating this art festival (which they gave him carte blanche on!) he created a HUGE Mercedes emblem hanging on a large chain in the central pavillion of the exhibition… as well as a few huge emblems tucked around the space… and then around 25 special chain necklaces with authentic Mercedes-Benz emblems for the artists and key brand folks…

As a girl with a passion for logos and brands since a young age… it was absolutely fascinating to see how far this brand nostalgia goes, and the amusement everyone had seeing the HUGE chain necklace logo pieces as well as the select few roaming the party wearing the Mercedes Necklaces! Christoph Horn (Mercedes-Benz Director of Global Communications) generously gave me his necklace before heading off to china for the autoshow mid party! The details and story of the automotive chain necklace motif are far too fun ~ so take a peek at them (HUGE and life sized) on the next page… they are sure to bring a grin to your face. 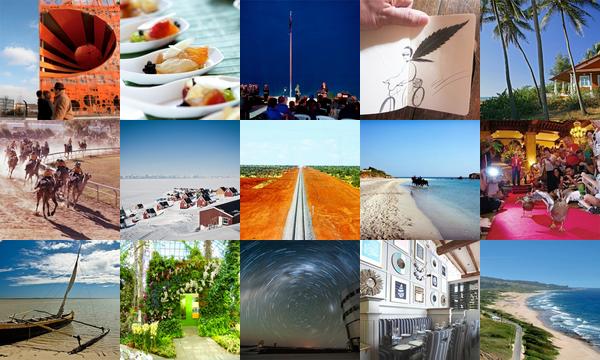 Camel racing, the Paranal observatory, and the remote Ittoqqortoormiit, Greenland are all part of this week’s travel roundup from NotVentures. To find out more about each destination, click on its individual image. 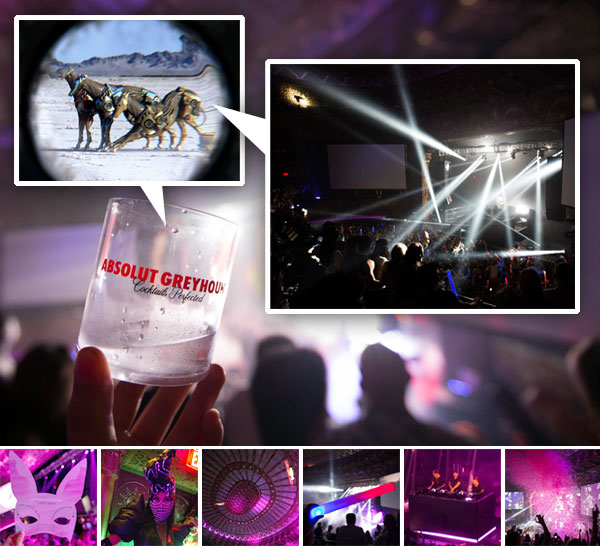 Continuing this coachella week of LA music madness, tonight we found ourselves at the picturesque Belasco (“a relic of the early 1900s” ~ and the rooftop of the theater is stunning!) in downtown LA joining Absolut Vodka to celebrate their new first (in a series of three!) original song and video inspired by a drink… first up, The Absolut Greyhound by The Swedish House Mafia… so naturally the surprise guest in the incredibly packed venue was The Swedish House Mafia. Great energy, fun visualizations, delicious drinks, and a gorgeous venue… as well as fun red and blue led’s illuminating mini foam tubes (think swimming pool noodles in tiny form) being bounced around throughout the theater… see it all on the next page including the Absolut Greyhound video and making of (incredibly fun surreal futuristic robotic greyhounds!) and a video of some clips from the dynamic performance (a fun test of the 5D MKIII)… 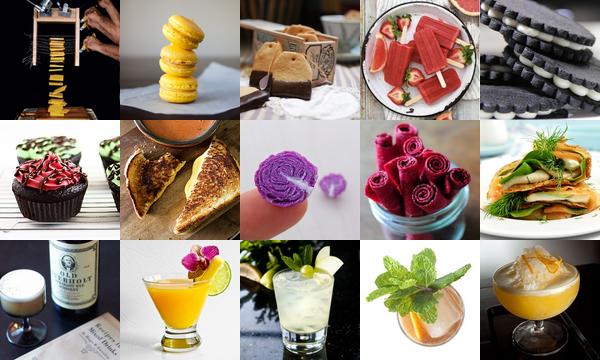 The magic behind food ads, London cocktails and reinvented Oreos are all part of this week’s roundup from Tasteologie and Liqurious. To find out more about each tasty post, click on its individual image. 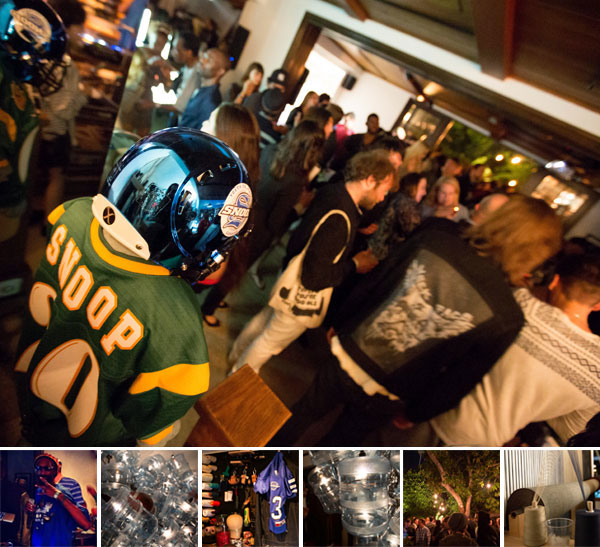 Well, that was an interesting night. This dual weekend coachella set up has ended up with a slew of musical amusement in LA for the week in between… and tonight Levi’s threw a haus party hosted by Snoop Dogg in celebration of The Snoop Youth Football League. The Levi’s Haus was packed ~ Snoop spinning all night on macbook pros ~ the bar tending ladies in Snoop YFL jerseys ~ edison bulbs hanging in the trees casting a gorgeous glow ~ fun Water