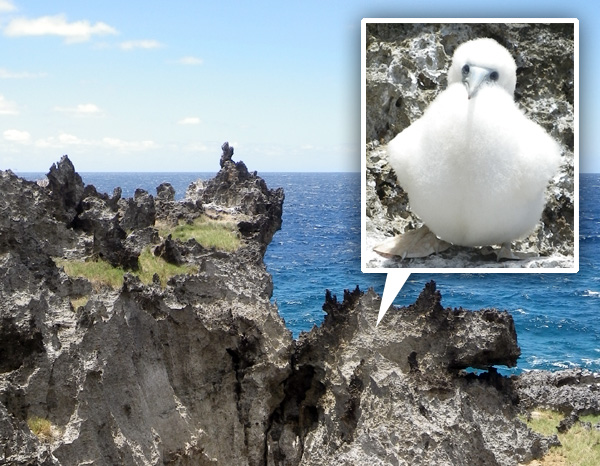 Wow. SO CUTE. The various species of boobies (red-footed, brown, etc) and sharp coastline are amazing! These are also in from my dad’s adventures in Christmas Island (which according to wikipedia - The mountain was originally a volcano, and some basalt is exposed in places such as The Dales and Dolly Beach, but most of the surface rock is limestone accumulated from the growth of coral over millions of years. “The summit of this mountain peak is formed of a succession of tertiary limestones ranging in age from the Eocene (or Oligocene) up to recent reef-deposits, with intercalations in the older beds of volcanic rocks.”)… so far you’ve seen the insane crabs… see the rest of the bird and jagged coastline pics on the next page! 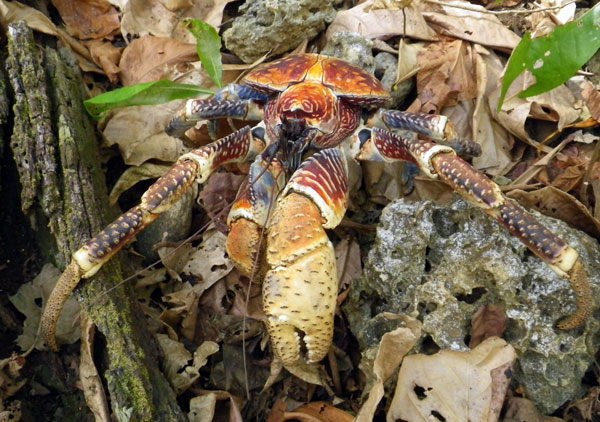 Freshly returned from his latest adventure, my dad just sent over pictures of some of the amazing robber crabs, red crabs, and other random crabs he found in Christmas Island. They are HUGE! And gorgeous! And amazing! Take a look on the next page!

Peter Gronquist “The Evolution Will Be Fabulous” 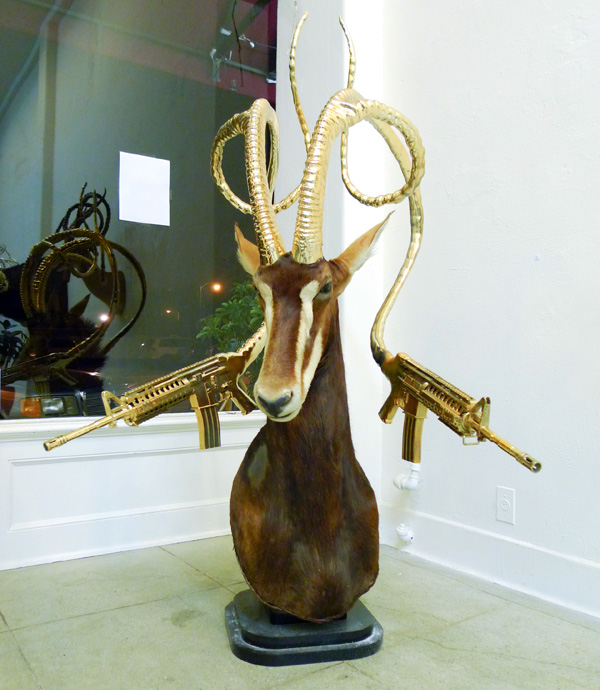 Last night, popped by the latest show of Peter Gronquist, The Evolution Will Be Fabulous at Gallery 1988 in Venice. It’s AMAZING, definitely something worth checking out in person, because the mix of gilded luxe brands, weaponry, skeletons and taxidermy are just something you can’t completely comprehend through pictures… the shear scale of things is pretty mesmerizing in real life. But for now, take a peek at some pics and details on the next page! 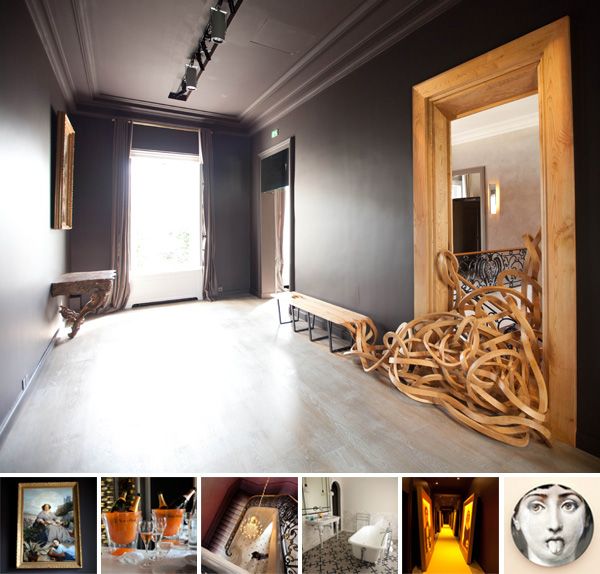 Embargoed until a few hours ago ~ it’s been driving me crazy to sit on these pictures from my few hours in Reims, France for lunch a few weeks ago! Veuve Clicquot’s Hotel du Marc, which is barely a hotel at all ~ more of a magical guest mansion of sorts in Reims that Veuve Cliquot uses for special occasions ~ has recently finished its restoration/remodel which now includes some lovely themed guest rooms filled with modern art as well as hints of its past! From the beautiful staircase and the Chanel like faceted mirrors, to the Veuve-yellow Smeg and wall of champagne… the ornate chandeliered dining rooms to the modern portraits lining the hallway to the guest rooms… there is so much to take in, but here’s a first peek into their world!

p.s. you can also catch me in a few reflections rocking the super yellow veuve apron… 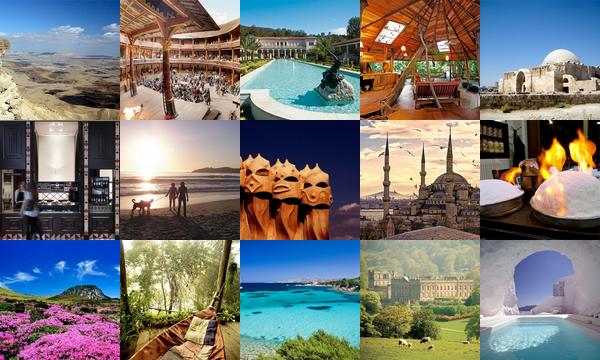 Cave hunting in Thailand, stunning Sardinia and a 48 hour adventure in Amman are all part of this week’s roundup from NotVentures. To find out more about each destination, click on its individual image. 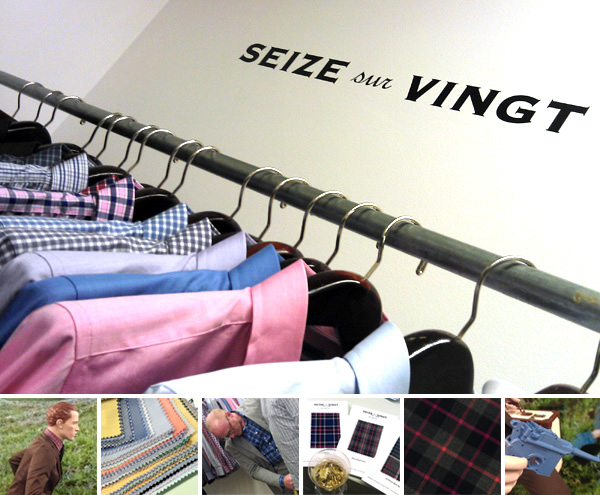 On random NOTCOT firsts ~ i’ve never watched a guy get fitted for a shirt ~ while sipping Bushmills + Ginger Ale with cookies. Shopping Fred Segal tonight, popped by the Seize sur Vingt event to take a peek at the new Fall/Winter 2011 collection of bespoke shirts made of amazing feeling italian fabrics… Fun detail to note? These may be the perfect shirts for anyone who loves Billy Joel’s “We Didn’t Start The Fire” ~ as the names for the various patterns in the previous and current collections are named after phrases from the song. From British Beatlemania and Foreign Debts to Joe DiMaggio and Pope Paul Malcom X to Strangers in a Strange Land and Watergate Punk Rock. While the link between color/pattern and naming didn’t seem clear to me, i do wonder if there is a secret visual code that will emerge when you place the patterns (or overlap the swatches) in lyrical order… Take a peek at the event, the details, and some of our favorite patterns on the next page! (… as well as the music video with lyrics and corresponding shirts linked!) 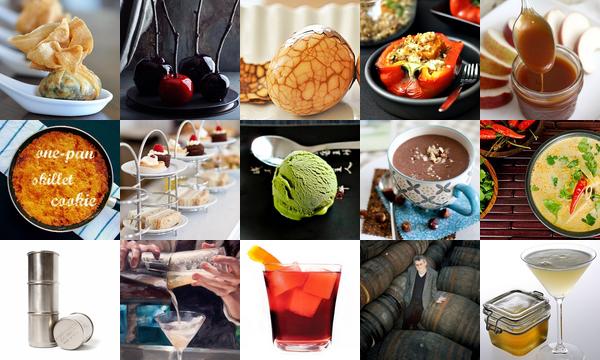 This week’s sumptuous roundup from Tasteologie and Liqurious includes the Bee’s Knees, high teas and scary apples for Halloween. To find out more about each post, click on its individual image. 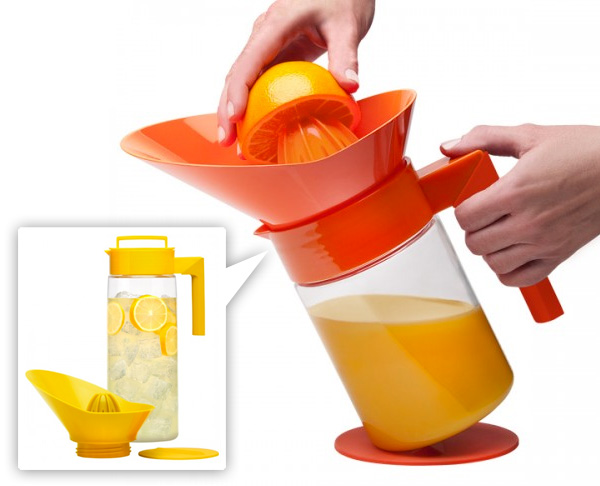 On fun contraptions that might make kitchen life a tiny bit simpler, i’m liking these Orange Juice Makers and Flash Chill Lemonade Makers from Takeya. Simple swappable screw top lids allow you to juice right into the container before you serve or pop it into the fridge! See more pics of them in action on the next page. 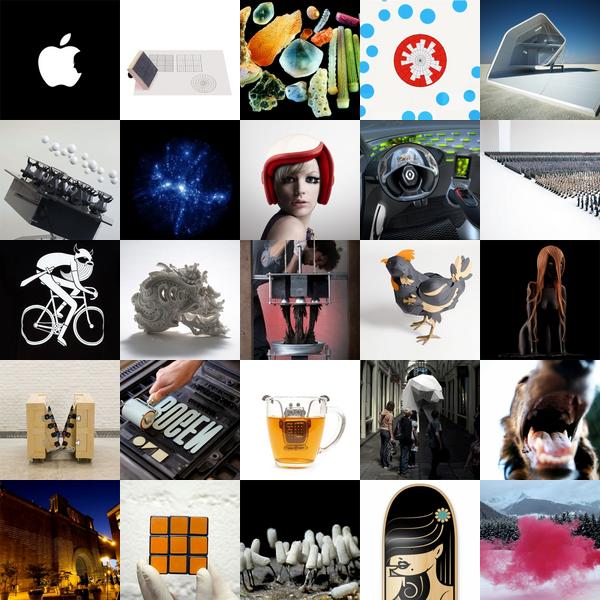 Dark matter, slime molds and stools created with the help of magnetic fields are all a part of this week’s roundup from NOTCOT.org. To find out more about each post, click on its individual image. 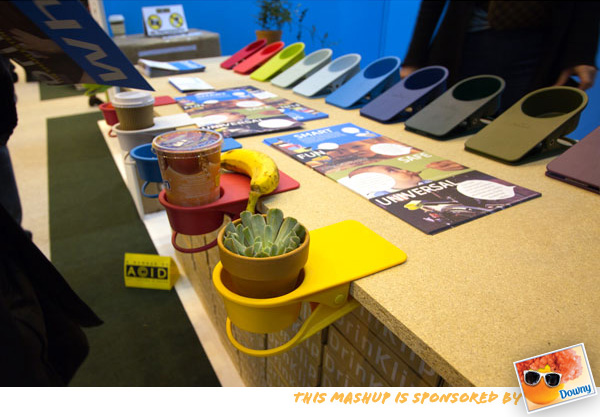 This series of Unexpected Combos posts is sponsored by P&G Downy.

Our London-based editor Justine Aw catches up with the latest action from the London Design Festival! For this latest in unexpected combinations, we love the idea of an object that can be used to hold just about anything your mind can dream up ~ while functioning like a giant clothespin! Another discovery from this year’s 100% Design, Been Kim’s DrinKlip. Sometimes you just can’t find a cupholder when you need one. How convenient would it be if you could add your own to any surface? That’s exactly what DrinKlip sets out to do. The piece clips onto desks, shelves, or even the arm of your chair using a classic clothespin design and gives you a cup that can carry up to 1kg. These clips come in a range of fun colors and can hold all sorts of things (love the idea of using them for plants!). Each sale also supports efforts to develop wells and water filtration for areas in need. More photos on the next page! 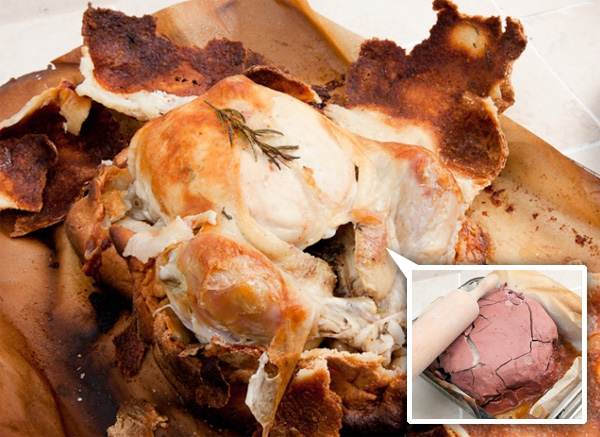 Amazing. Cooking just got way more fun ~ Jackson has been going nuts with some awesome Tasteologie Features as of late ~ and today’s is AWESOME. Baking with CLAY. Smashing it open! And poof — chicken! A full chicken! And another in bread! Equally satisfying… you have to see the pics of the chickens in action!

p.s. So… ca i build a whole clay scene atop the chicken before baking? or have other clay pods attached cooking OTHER things to smash open? Hmmmm… the possibilities! 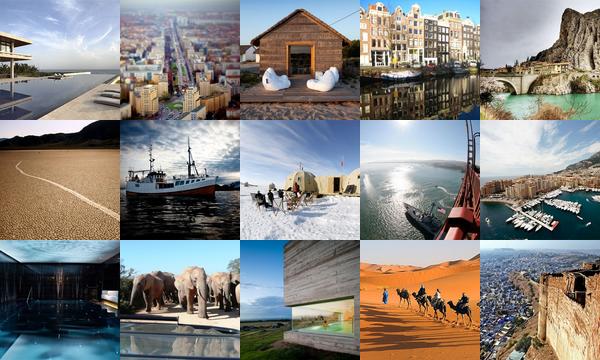 Visits to an elephant camp, idyllic Antarctica and the Valley of the Sliding Stones are all a part of this week’s roundup from NotVentures. To find out more about each adventure, click on its individual image. 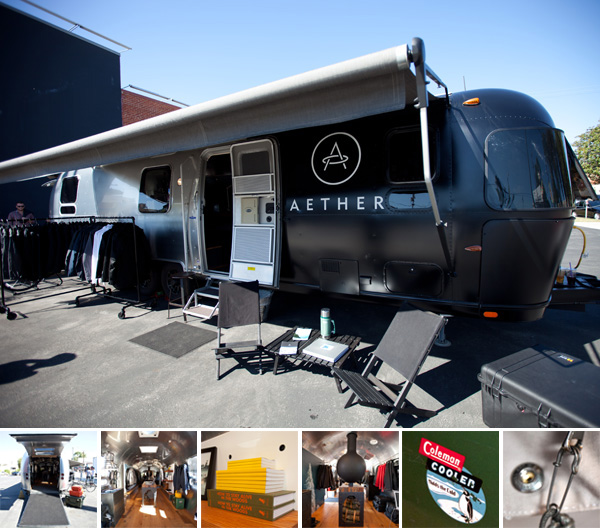 I love when things just fall together. Like yesterday ~ finding out that the gorgeous AETHER APPAREL (who has been a kind supporter of NOTCOT over the years through beautiful advertising!) is actually LA based! And love matte black/metal/wood minimalist gear, gadgets, and cars/etc as much as we do. They just took the mobile pop up shop to a whole new level with their AETHERstream ~ designed by Thierry Gaugain, this airstream that has been gutted and retrofitted with reclaimed wood floors, modular shelving, and vintage gadgets/gear… and their storage? Stacks of huge pelican cases! It’s a beautiful (though tight) space ~ and it was great to see the majority of their collection in person finally… the tiny details were amazing ~ from quality of materials and stitching (it just feels so GOOD!) to the awesome black safety pins they use to attach their tags and the Aether whistles on each piece. Take a little tour in and around the AETHERstream on the next page ~ it will be hanging out in LA for a few weeks before it heads cross country to NY by mid nov!

p.s. See the making of the AETHERstream as well as the original plans. 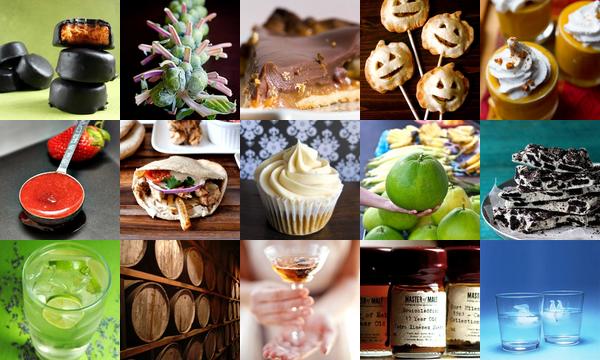 Sweet tea cocktails, Jack-o-Lantern pumpkin pies and Oreo cookie bark are all a part of this week’s roundup from Tasteologie and Liqurious. To find out more about each post, click on its individual image. 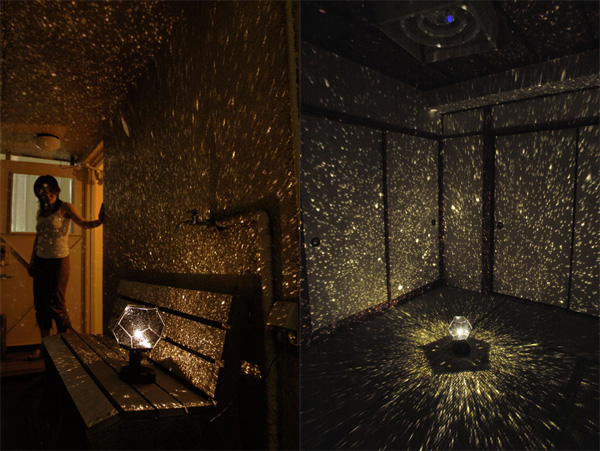 When i first saw the post titled “romantic star projector” over at Design Crush, i thought it sounded ridiculous. Then i couldn’t seem to stop staring at the pics. And there is something overwhelmingly awesome about the abundance of lights all around the room… and i can’t help wondering what it would look like if i turned off all the lights in my office, dimmed the monitors… and turned one on! You build it yourself ~ but can purchase the set up ~ and can even arrange it to mimic the night sky outside ~ or pick another spot on the globe… or another time. Take a peek at the pics and the set up on the next page.